From the 7th October until the 9th November 2016, Alma Contemporary Art Gallery in Trikala will be hosting the solo exhibition of the painter Vasilis Karakatsanis. The exhibition is titled “3 sections 2011-2016” and is the visual record of the last five years of the artist through the sections ‘Urban Details’ 2011/13 – ‘Roma’s Urban Tools’2014 – ‘Carpets’ 2015/16.

The art critic Anthi Argyriou mentions: “In Vassilis Karakatsanis’ collages and paintings the intense colour fields that constitute the background of a bright social life are prevalent while they converse with objects that the artist often depicts on his artistic surface: high heeled shoes, chairs, teapots and glasses; all are fetishes of a social status that has become the purpose and meaning of life for generations.

Karakatsanis in the section ‘Urban details’ puts emphasis on an artistic tradition that is winking at pop art and refers to the aesthetics of advertising, lifestyle and the superficial, frivolous survival of a specific social class: the powerful middle social class that has developed greatly during the historic period of Greek Metapolitefsis, the years of the financial blooming that has reached its peak when they undertook the Olympic Games of 2004 only to collapse like a house of cards five years later. The glow and the optimism that are emitted by a prosperous public life that looked like it has beaten the dragon of the fairytale are emblematic, even when reminders of a not very glorious historic past intrude the canvas taking the shape of an ‘autistic’, repetitive photo album of beloved faces that are lost in the glamour of oblivion.

Nevertheless the Karakatsanis’ social cartography saves a personal element: diary pages are hidden behind glasses and cocktails as silent reminders of an intensively experiential look that exhibits and at the same time penetrates the hypocrisy of the mentality of the modern ‘ego’ of the urban lifestyle. The artist- witness, historian, the artist- semiologist.”. 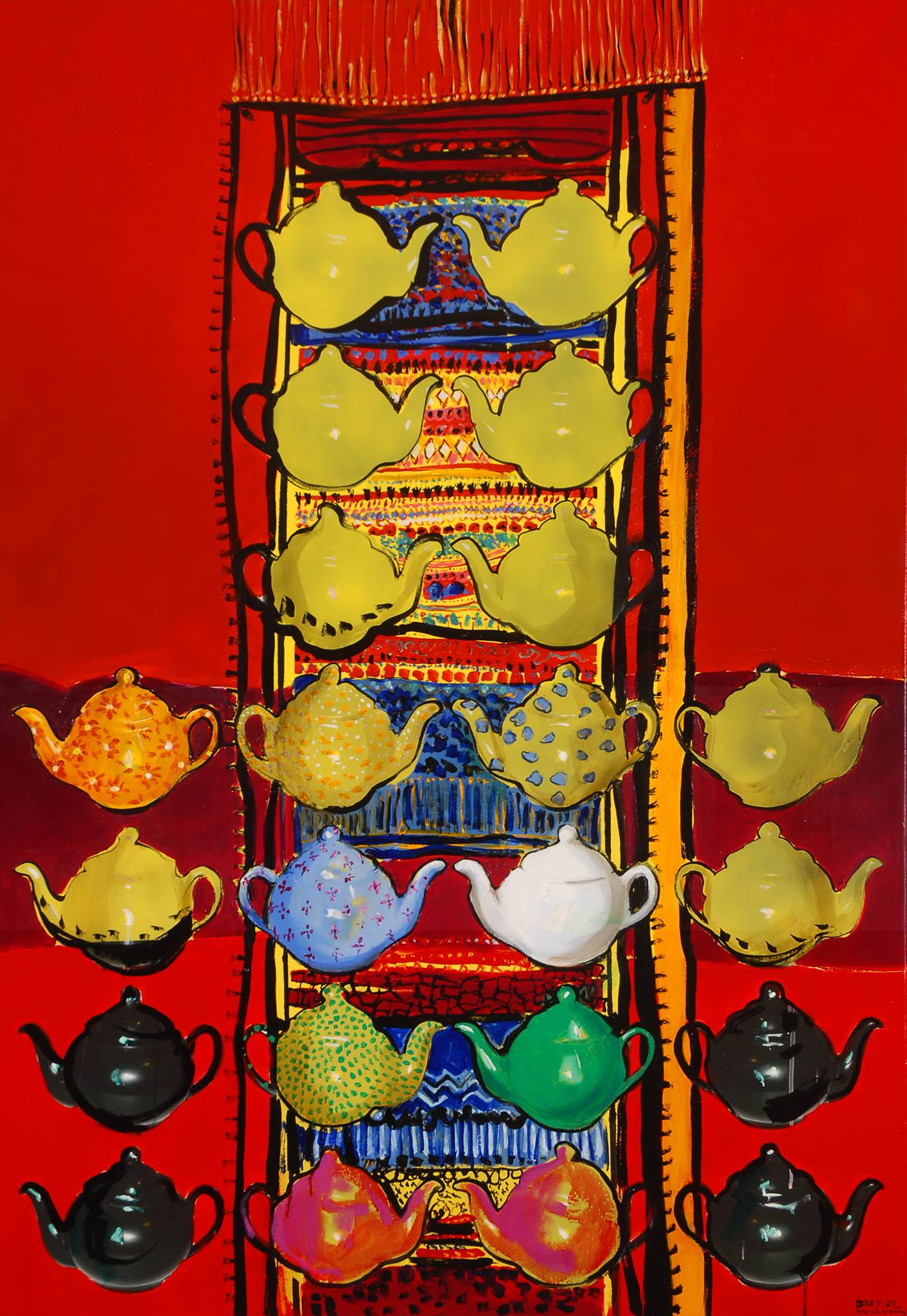 «Functional objects, such as furniture, cars etc, depending on the quality, the aesthetics and their value, are the “tools” that determine and trace the need that most of us have for an urban identity.

Despite of the differences we have, because of our various ideological perspectives, or even our way of living, I notice the subconscious need for an urban verification, through all these objects. The unconventional way of life of Roma, their sense of beauty, couldn’t surpass the need for “urban” identity. In the center of Athens, specifically Vathis square, is located my studio.

For many years now, I observe hundreds of Roma, mainly from Romania and Moldova, that they live and trade in this neighborhood , sometimes with distrust and other times with excessive admiration or envy, because unlike me they seem to live a life, free of stress. Here I paint our common “trap”. So maybe they do share the same stress as me, only with a different code or aesthetic. ».

Vassilis Karakatsanis presents the “odd” family Abd Al Aziz which, having Beirut as its seat and being active in various cities (especially in the Mediterranean), trades ‘magic’ carpets to people who have the courage to travel on them, living out either the illusion or the reality. The members of the family are dispersed in various cities, thus maintaining the independence of their personal lives, each one influencing the buyers, with their dynamics or by employing other ways, those of seduction or magic. The profits are equally handled for all the members of the family by a firm based in Geneva.

After 25 years, Karakatsanis comes back with a topic he has been preoccupied with in the past, but with a different motive. In 1991 in Galerie Titanium Vassilis Karakatsanis in co-operation with Maya Tsoclis presented ‘Carpets 1’.Works of art of great dimensions which, with carpets as their main theme, approached the application of his printed works of art on fabric and the creation of women’s clothes by Tsoclis in a discursive exhibition, at the gallery.

His artistic approach today is nothing other but the ‘horizontal cross-section’ of the majority of his approaches, all the years of his work, with its final ‘key’ being the fabric, a material which prevailed in his artistic endeavour, most prominently as an element of the surrounding space but also with an evident ‘experiential relationship’. [*TA NEA, 4/12/1989 Athens, Charis Kambouridis]. 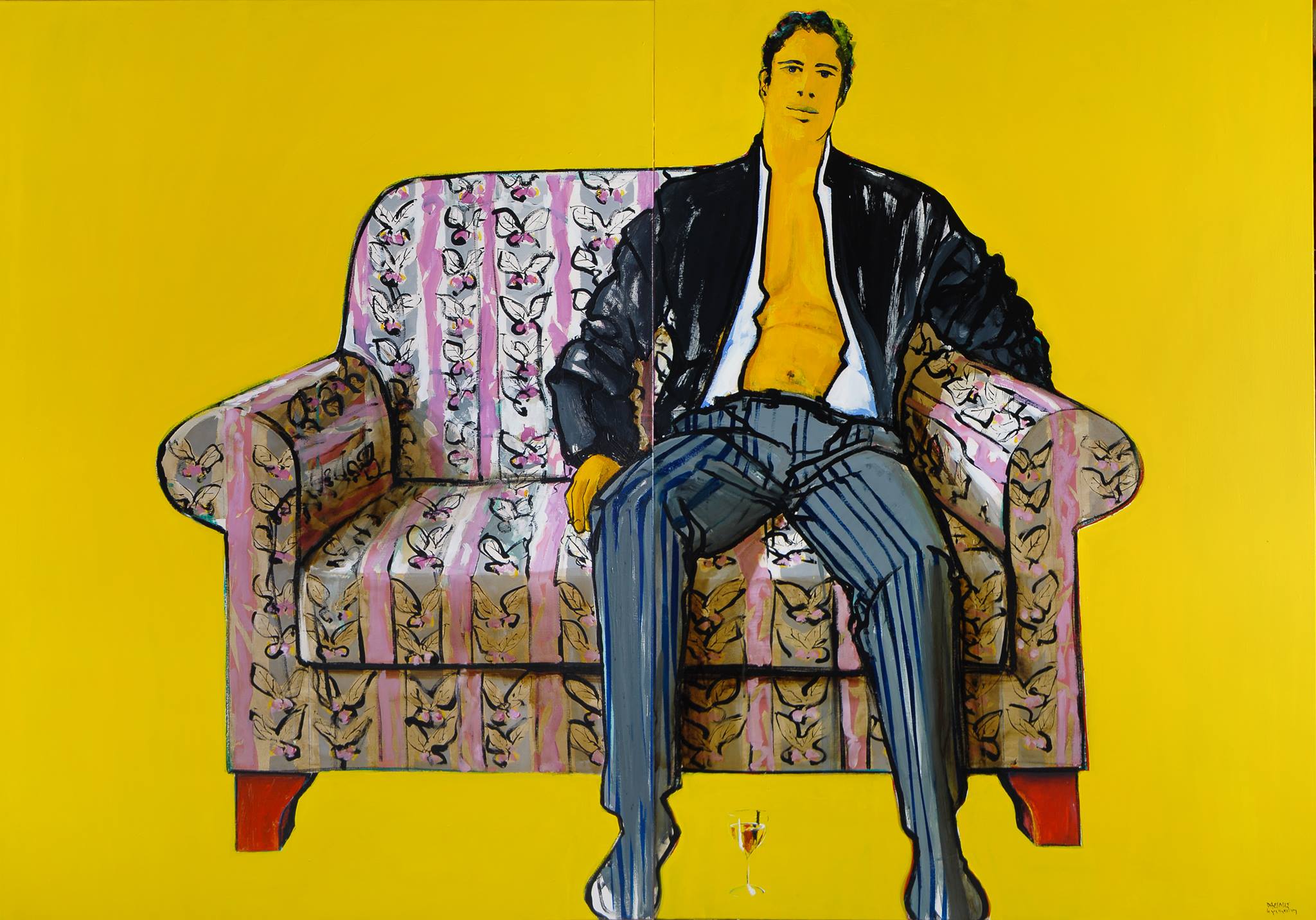